I have been thinking of a way to write this post for a few weeks now. If you know me or have been hanging around the blog for a while you know I like to post sweet creations and share tips so you can make whatever you dream of in your own home. Well, I’ve been quiet for the last month because my community suffered something that has changed things forever. It has changed the way I look at life and I’d like to share a little bit of information about the Gatlinburg fires that started at The Chimney Tops.

Several of you sent emails and Facebook messages to check on me and you’ll never know how much I appreciate it. I love you all and you’re a huge part of my life. Thank you for sharing this cookie journey with me. 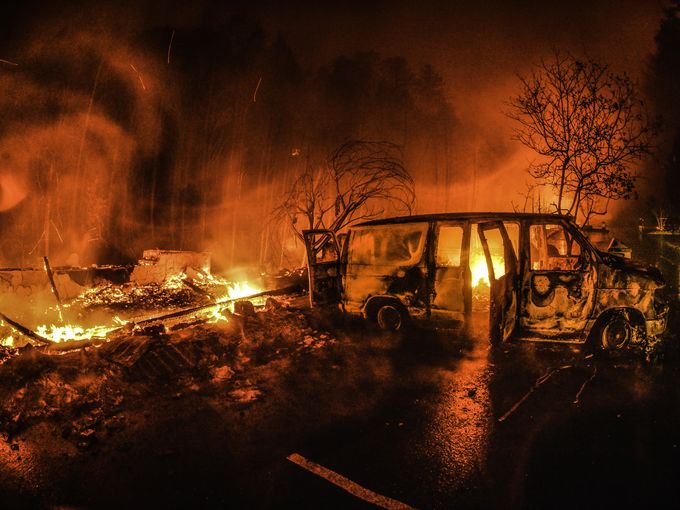 It all started with a drought, dry leaves, strong winds, and a spark that killed 14 people, injured over 190 people, damaged and destroyed almost 2,500 homes and businesses, and burned over 17,000 acres. Gov. Bill Haslam said, “This is the largest fire in the state of Tennessee in 100 years.”

As the mountains burned they looked like volcanos with oozing lava flowing down from the tops. We knew it was fire, but since it was burning from the top of the mountain to the bottom it looked like volcanos I’ve seen on the news. Winds were reported at almost 90 MPH which is like a category one hurricane. The winds helped carry the fire to the tops of surrounding mountains which ended up burning anything in its path. 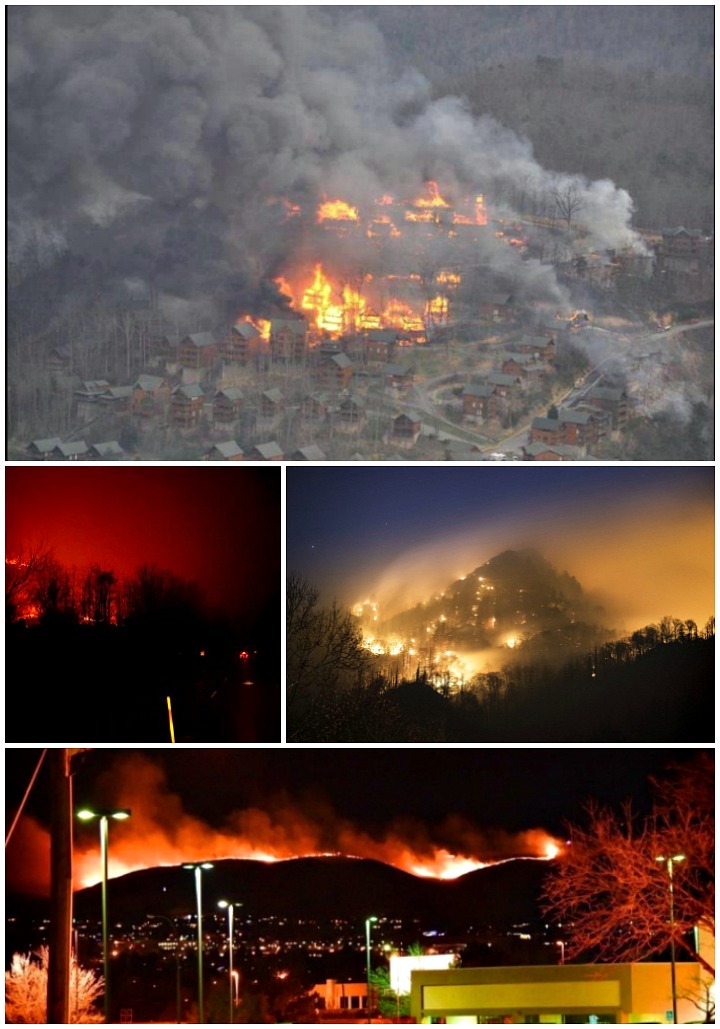 Dozens of people were trapped in the Park Vista Hotel in Gatlinburg and they could see flames almost touching the structure right outside the window. They laid on the floor with masks on their face because the smoke was so bad they could barely breathe. They couldn’t leave the hotel because downed trees blocked the road so all they could do is pray and hope the road would be opened so they could escape.

One mother wrote the names of her son and nephew on a piece of paper along with their ages and what state they lived in. She did this because the smoke was so bad she knew they would soon pass out and hoped by leaving the paper, someone would know who they were. She said she wanted them to pass out before they had to suffer more devastation then they had already suffered. Watching the news report is on of the most pitiful and heartbreaking things I’ve ever seen. Here is the news report if you want to watch. 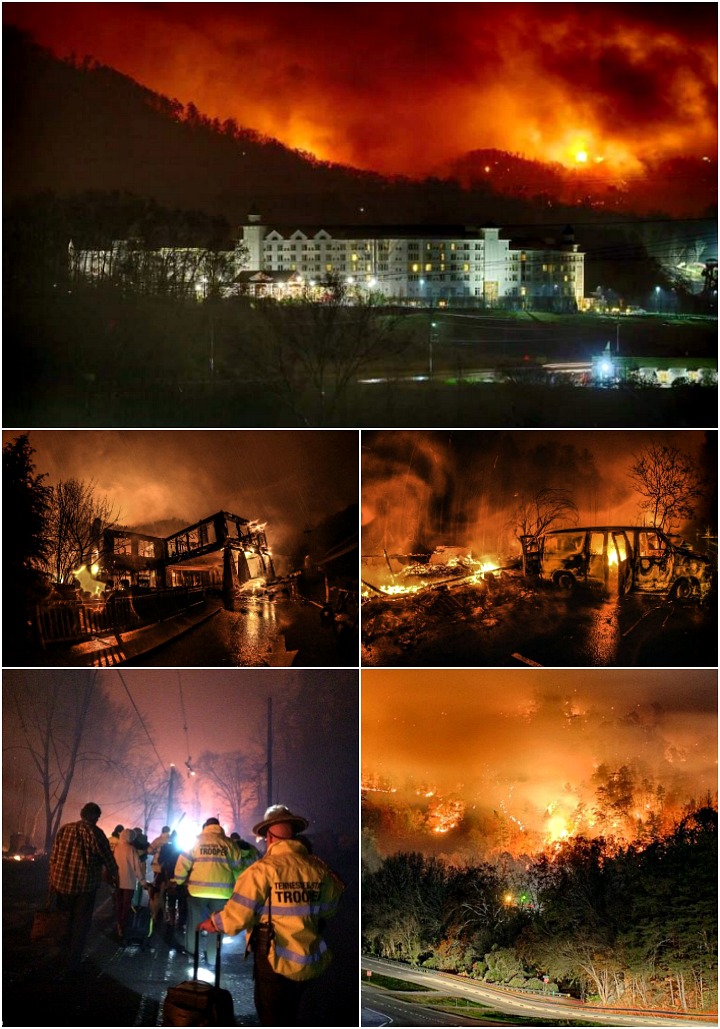 The Gatlinburg fires weren’t close to us, but the community where we live had a few of our own. They caused emergency evacuations and burned down several homes. Fallen trees blocked the roads so some people were trapped and couldn’t get away from the fire. Propane tanks exploded and the power lines fell and led to power outages all around Wears Valley.

After the Wears Valley fire was contained, the local news showed a family that had to evacuate quickly as the fire approached their home. They escaped safely, but their home was destroyed. News reporters questioned the mother and she said she doesn’t own a toothbrush, but her family and pets were safe and she felt lucky and blessed.

As news reports came in Alan and I discovered that Reverend Ed Taylor, age 85, died during this tragedy. This was heartbreaking for us because he is the reverend that married us many, many years ago. I’m at a loss for words. 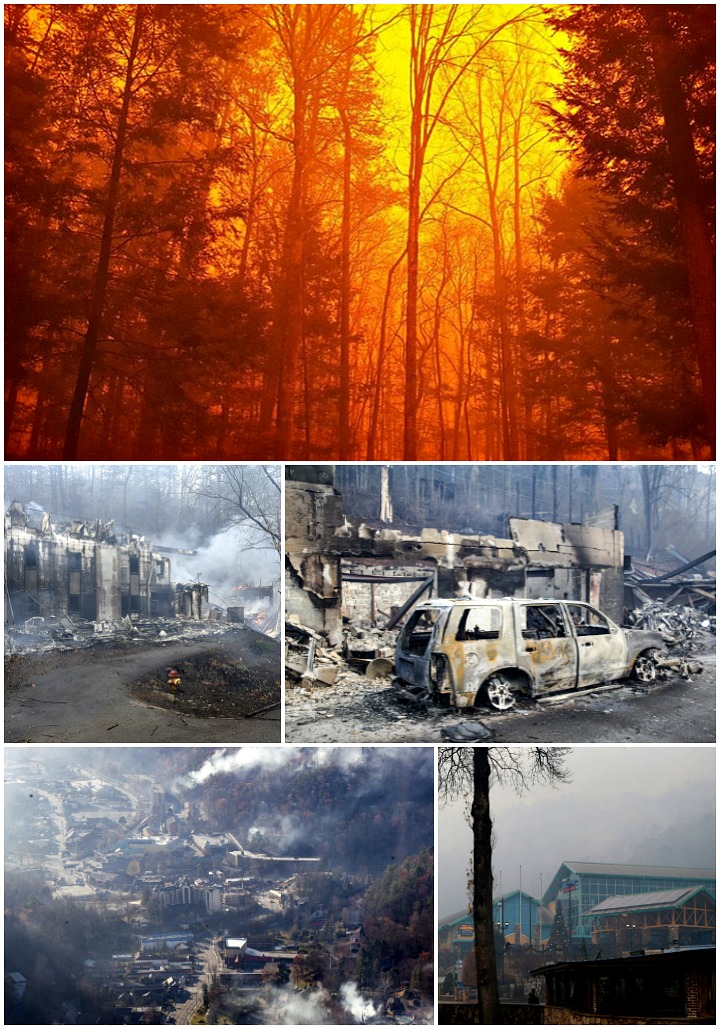 As of now, the fires are out, but the damage is all around us. There are burned cars, homes, churches, businesses, and huge black burn spots on the mountains all around the county. It looks as if they took away our beautiful community and replaced it with some kind of creepy movie set with lots of ashes and debris. My mind is still trying to realize this is the reality and not some movie that will be over in 2 hours.

The sad part about the Gatlinburg fire is discovering it was man-made. I personally don’t have all the details and couldn’t stay on top of the news reports with the power outages, but it has been reported the fires were started by two teenage boys, ages 15 and 17. Reports state they were playing with matches at the Chimney Tops. Again, I’m at a loss for words. 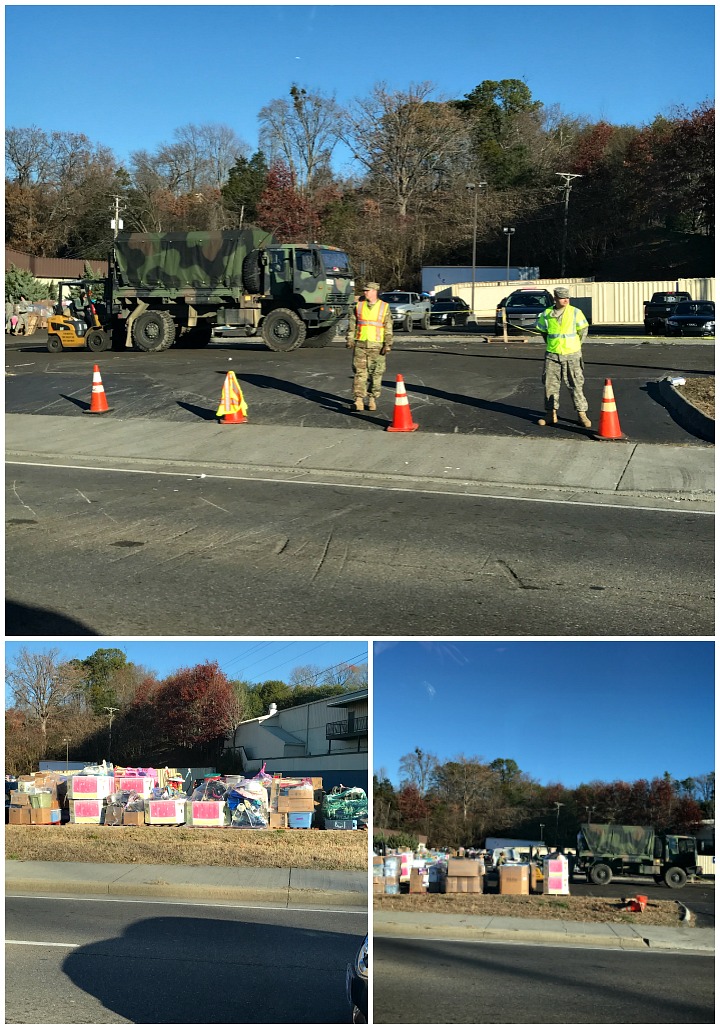 As I think of all the damage that the Gatlinburg fire caused and how much Sevierville suffered I now have new memories, but not the kind of memories you might be thinking about. Yes, I’ve seen sadness, but I’ve also seen so much love, kindness, and hope. I’ve seen people who showed up from surrounding counties and states to offer any kind of help and support we needed. They sent clothes, food, water, firefighters, and even volunteers to help with shelters for those who needed a place to stay.

I can’t begin to describe all the hard work and love I’ve seen since the day after Thanksgiving. You can feel the love and kindness in the air. 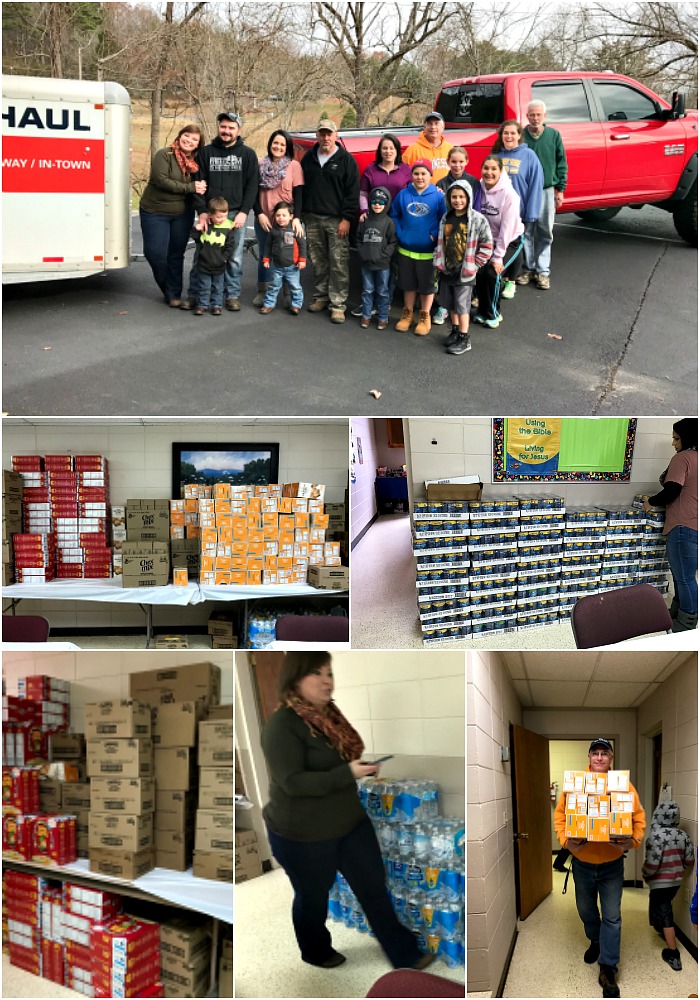 Dolly Parton also set up a “My People Fund” to offer those who lost their homes in the Gatlinburg fires $1,000 a month for six months to remove some of the financial pressure and help them get back on their feet. 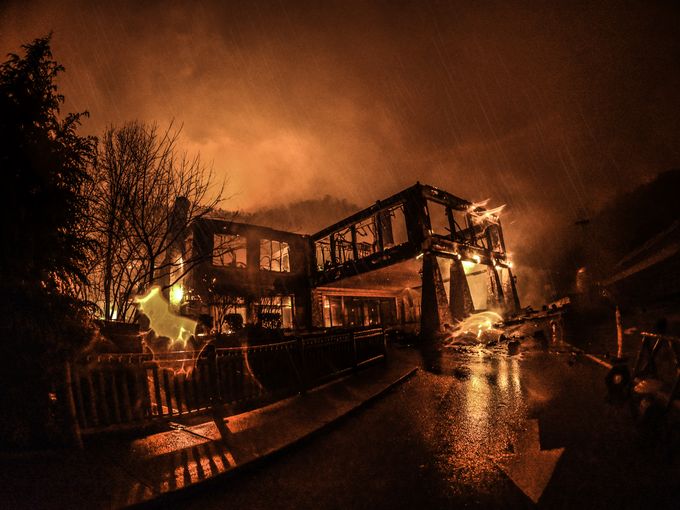 Images of firemen, rescue workers, State Troopers, The National Guard, medical personnel, power workers, men with chainsaws, and little kids carrying boxes of donated goods fill my heart with warmth. Seeing everyone work hard and being friendly and generous is something I will never forget. People who lost everything are helping their neighbors before they begin to think about themselves.

I don’t know if we will ever know the truth about how the Gatlinburg fires spread. Did it start at The Chimney Tops with two boys and a box of matches? We don’t know what will happen to the boys and how the families of those that lost their lives will move forward. I pray they know God and let him help comfort them in their time of loss. 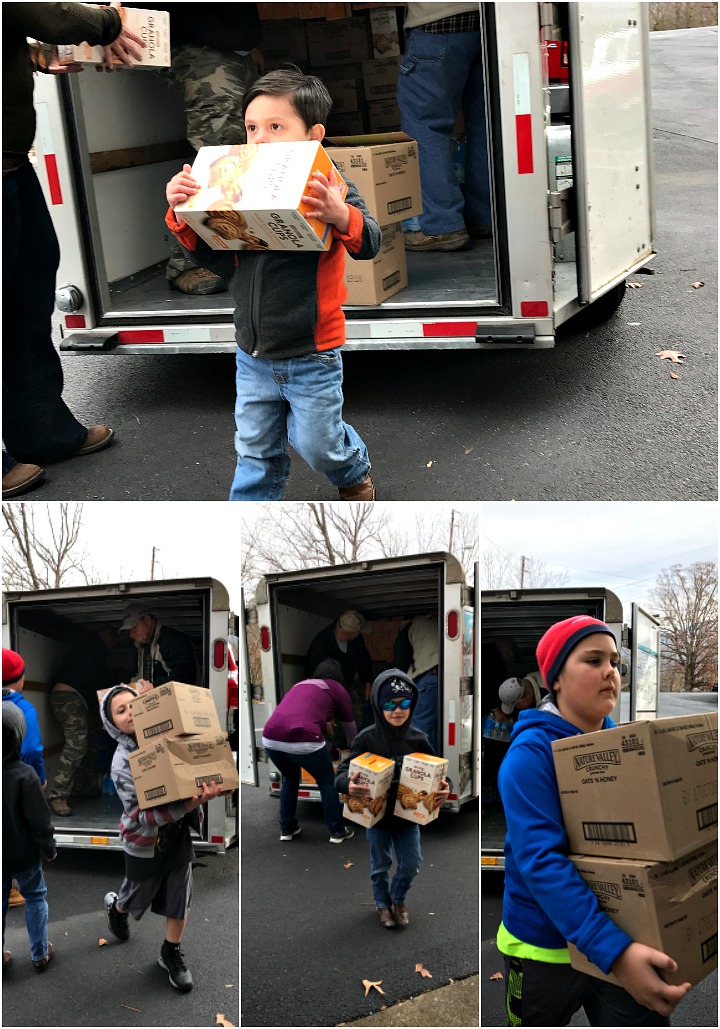 I hear people all the time talk about what this world is coming to. About all the anger and hatefulness and it makes me sad because the bad always seems to outweigh the good. Well, not today. Not in my community. I have seen good, kind, loving, generous, strong and hopeful people show up ready to serve. Ready to make life better for those in need. Ready to rebuild. This doesn’t just apply to the fires here in Tennessee. I’ve seen it over and over on the news talking about those who have suffer hurricanes, tornados, earthquakes and floods. People are strong and we have a will to survive, but most of all, we have each other.

I’m back in the kitchen baking and decorating so I’ll share some goodies with you very soon. Thank you for your support and caring about each other. 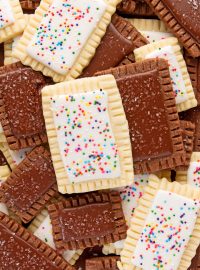 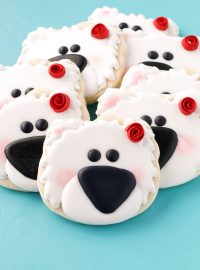 How to Make These Simple Polar Bear Cookies-Video 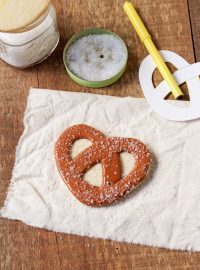 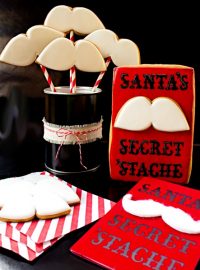